Sony ILCE-QX1 has great specifications at low weight, which makes it good for UAV photogrammetry use.  It can be configured using WiFi , then retain the configuration. (so it’s not necessary to even enable wifi for each operation.

The pop-up flash assembly is removed, an microcontroller replaces the flash assembly, it’s interfacing the motherboard indirectly, via FPC. The flash cover is slightly cut to make space for the servo (PWM input)   and logic level output that indicates shutter operation.

Can reliably do manual-focus shoot every 700ms. (no drops)

The camera will continue to function normally as before when the PWM interface is not supplied with power, except for the flash.

The modification requires micro-soldering; most narrow are three points within 1mm distance. Naturally, it voids camera warranty. (so test camera well before getting it modified.)

Features of the modification: 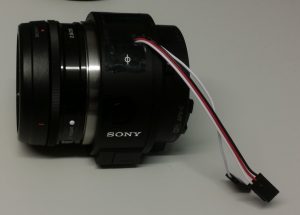 I can convert your camera, but I am unable to provide QX1 cameras from Norway.